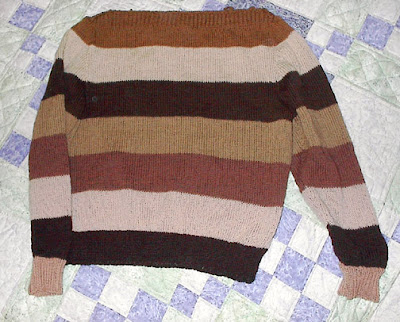 I've calmed down about the sleeves, and they turned out just fine. I recalled at a certain point that they were set-in sleeves, which tend to add length.

I'm still not sure LB will like it. I've been openly working on it in front of him for the last two weeks, and he's not asked a single question beyond the initial, "What are you making?" I have a feeling that it will be sweater he doesn't care for at first but finds himself wearing a lot.

Last night, I asked LB if he were willing to sign up for another year-long hitch, and he countered with a six month offer. I reminded him that he would then be required to remember our anniversary date every six months and come up with two gifts a year.

He opted for another year. I think I'll keep him.

The sweater looks great. I can't believe how fast you finished it.