The sanitary fair went reasonably well, although attendance was very light, and that's putting it mildly.

The flooding may have been an issue. I had to leapfrog across the state between Hannibal and Lexington because Highway 24 was closed periodically due to washed out levees. Thanks to a eventually finding a sheriff who knew where the flooding finally ended, to my gazetteer (love, love, love it), and some well-placed gravel roads, I did make it. Some more levees had broken Friday night and there was water everywhere in some areas. If the road was opened, the ramps were flooded. It was pretty wild, and I haven't seen the like since '93.

I'm actually a little shy at the moment of putting up a pic of the fair. SRS's comments make it sound so wonderful, which is really kind of her, and I did work hard at it. The problem is, that many sanitary fairs looked like this: 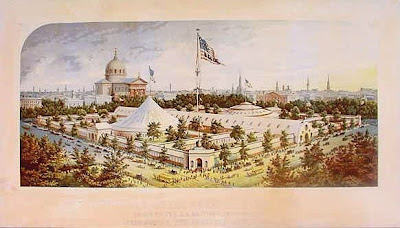 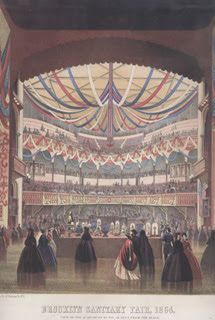 And, you know, it's kind of hard to pull that off. Still, Lexington did have a smaller fair, and perhaps it was held outside, and perhaps one small part of it looked like this:

Now that it's over, I'm looking forward to getting back to work on my Dyeabolical Yarns socks. And my sanitary fair obsession has now evolved. I'm now obsessed with sanitary fair post offices, special issues of stamps, patriotic envelopes, and more. Stay tuned.

It's once again time for the countdown (aka, the end-of-semester) work I'm trying to avoid:

Hee! I love it when I know someone is knitting with Dyeabolical Yarns.

You look great in your costume. I'm sorry to hear attendence was so light. In regards to your last post, I would love to hear more about the East Coast/Midwest politics issue.