I'm off for a gig tonight in Hannibal and then have to book it all the way across the state at the crack of dawn on Saturday (in costume no less) for the Sanitary Fair in Lexington, MO.

When the war began, the military geared up very quickly, but the supply lines were not smooth, and the troops suffered. Previously healthy troops couldn't get enough food or supplies like blankets and shirts at their camps. Illnesses from a lot of men in unclean conditions and in close quarters quickly became a problem. Those who fell ill or were wounded ended up in hospitals, where conditions could be even worse. Think about the problems at Walter Reed and multiply by 10,000. Some men even refused to go to the hospitals because of the poor conditions. Sanitation, a relatively new concept, was a big issue, hence the name. 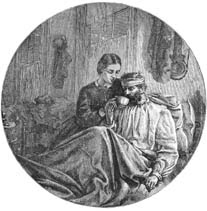 The U.S. Sanitary Commission saw this problem and stepped in to provide troops with food and supplies, to volunteer at the hospitals, and to raise money for the families left behind. They were able to cut through a lot of the government bureaucracy and did an amazing job. Through their efforts troops were supplied with towels, bedding, clothing, all kinds of food stuffs. Women gathered to scrape lint, roll bandages, make quilts, knit mittens and socks, and much more. In St. Louis, the Western Sanitary Commission provided customized meals for all the hospitalized troops. They also organized trains to bring troops away from the front lines to hospitals in northern cities and kept track of injured troops so that their families could find them.

As the war went on and fund raising and morale flagged, the Sanitary Commission turned to sanitary fairs as a way to help meet their needs. The fairs were generally very successful in raising money and, more importantly, morale. Waves of fairs swept the country, from small fairs run by children out of private homes to huge fairs, two miles long, with specially built structures to house the various exhibitions. The larger fairs would last for weeks and be loaded with activities and exhibits. There were tableaus, dances, raffles, lectures, art exhibits, parades, concerts, and more. On display were all kinds of commercial goods as well as handicrafts and foods, all for sale.

One problem of the fairs was that women who had previously been making bandages and shirts turned to making handicrafts. These items were then sold for money, which was used to buy, you guessed it, bandages, shirts, and other supplies. People saw the activity of the fair and weren't terribly connected with all the actual money needed to support and supply the troops. Still, overall the fairs helped to buoy the morale of a nation exhausted by years of war. 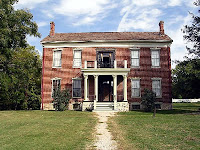 I've thought a lot about those women over the past few weeks as I've been knitting and sewing. I'll get to keep the money I make, but we all know it's not possible to really make what our knitting is worth. I've also tried to come up with a number of activities that will raise money for the Anderson House. We'll be selling reproduction photographs and putting out boxes for money for "Freedmen" and "Union Refugees." Money from those will be donated to the site.

*There's a world of nasty East Coast/Midwest politics involved in this issue, which is really fascinating to me and has a ton of resonance even today. I'll share it if anyone is interested.
Posted by 7-letter Deborah, never a Deb at 9:53 AM

I'm absolutely fascinated by this stuff. Your research is so interesting. I had no idea that these fairs were used to finance the war relief. There are so many things we don't learn in school. I saw a cool show on Channel 9 about St. Louis and the Civil War that blew me away.

Gig tonight in Hannibal... hey, that's the monthly contra dance, and I'll be fiddling there!

Then whole band looks forward to playing for any dance called by Deborah.

I'd like to say that I saw Deborah's display at the Sanitary Fair yesterday and was blown away by it. There was a magnificent array of period crafts, candy, and reproduction paper goods such as friendship badges, patriotic emblems, and various period "favors" for children and adults. It was all perfectly researched, right down to the money collection boxes, which she had hand painted in stars and stripes. The puch-paper mottoes were gorgeous (I wish I'd bought more than one now.) D, I hope you post a picture or two of your fair -- I've never seen anything like it. Everything was displayed in period correct baskets and boxes on a hand-embroidered red table cloth made by D's grandma. I particularly liked all the little touches such as the hand-inked list of goods and prices in Spencerian script and the tiny brown paper bags of candy (period correct of course, like sugared almonds & horehound candy).

The tables were beautifully set off in the grounds of an antebellum mansion in western Missouri. I think the spectators & visitors really appreciated the chance to support the house & grounds. What I especially admired was the subtle way Deborah showed people that preservation is patriotic. I think people felt very good about being able to donate a few dollars to a "period" cause and at the same time do something for historic preservation.

I think Deborah raised quite a bit of money for the house, too. Excellent work. I'm sure the NPS and the site administrators appreciated your efforts.