The miser's purse is a great example of the challenges that face a reproduction knitter.

First, there's the problem of definition. You may encounter a vendor selling something labeled as a "miser's purse," but it may be another type of purse entirely, and it may not even be an historically accurate purse. It could just as easily be a modern pattern with an old-timey name. It could easily, horror of horrors, be some tacky little dealybopper out of KnitCroSheen.

These are not miser's purses.

Not even a passing resemblance.

I won't say where I found this image, but if you see them, run in the opposite direction.

For now, we'll settle for the following: A miser's purse is designed for holding coins and is a narrow tube, closed at both ends, which opens by sliding one of two rings away from the long slit in the middle of the purse. It is generally worn draped over the belt. The miser's purse likely got its name from the difficulty in extracting coins.

Go ahead and click on the image to see an enlargement. I'll wait.

The trouble is, while this is a lovely pattern, and I'm so glad it's out there, it also bears only a passing resemblance to Civil War miser's purses.

I'll note at this point that I'm making this pattern, and enjoying it, but I really consider it a prototype, a practice piece, for a more authentic one. I also want to emphasize that neither Piecework nor the author claim that this is an authentic Civil War pattern.

By jumping from an general awareness of miser's purses to knitting a pattern from a modern magazine, you've committed one of the most common errors in reenacting--skipping the research. To be more precise, you haven't bothered figuring out what miser's purses looked like during the nineteenth century.

A look in ladies' magazines of the period is a good start, and you may notice right away how fancy period miser's purses are. The Piecework purse is knit in stockinette in a solid color. It has a nubby little bead on each end. It doesn't look much like the period pattern with its multiple colors and embellishments and beaded tassles.

With the resources on the web, finding images of period miser's purses is not that hard. There's ebay, of course, and google's image search. Don't forget to look at closed auctions and to use variant spellings: "miser purse," "miser's purse," and "misers purse."

Even a fairly cursory search will turn up lots of close-up images of lovely miser's purses at some of my favorite online sources like Ruby Lane, which has this one or this one or this one. TIAS is another great source. Click on this one to see how the knitter economized by only beading one side of the purse.

You could recreate a particular purse, copying it in every detail, but for most of us the next step after researching is to make some generalizations. Military reenactors tend to look for what's PEC (plain, everyday, common). Civilians can too. The trouble then becomes figuring out whether the miser's purses that survive are PEC. Have they survived because they are special somehow? Were they so unusual that they were never used? 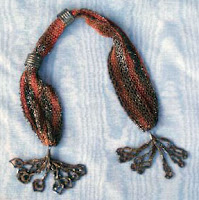 Right away, you'll notice that about 99% of miser's purses have some kind of beadwork on them, usually fairly elaborate.

You could add more beads to the Piecework purse, but most miser's purses used cut steel beads, which are very scarce and tend to rust.

I have seen one miser's purse with glass beads, but that's not exactly PEC. On the other hand, you may have to go with the best-available option if cut steel beads are simply not available.

The beading is definitely one of those places where a reenactor needs to make a decision, but it should be a decision based on research and the best available option--don't fall into the fallacy of "if they'd had it, they'd have used it."

I will say that I would not choose silver, as Pieceworks does. I'd go with glass, and for the rings, I'd use bone or brass ones and cover them with the same thread as the purse, as I've seen that done with enough regularity to be PEC.

Looking at period miser's purses will also reveal that very few of them were actually knit--most were crocheted, presumably for sturdiness and because of the tendency of beads to slip to the back with knitting. Some of the fancier ones were netted. Still, I think you would be okay with a knitted miser's purse; they just weren't PEC.

So, with the beadwork and the stitching, there's two strikes against the Piecework miser's purse. Another critical strike is the fiber choice. As with the beading, 99% of the period miser's purses I've seen are made from silk, a durable, sturdy fiber. Maybe all the wool miser's purses have been nibbled to bits by moths, but the patterns of the time almost always mention silk as the fiber of choice.

The most authentic miser's purse would, of course, be an original. They're out there and their value ranges from $20 into the hundreds, depending on condition. You should never, ever use one though. We'll save that rant for another day.

In the meantime, knit the Piecework miser's purse. Tweak it to within an inch of its life. And wear it with pride.
Posted by 7-letter Deborah, never a Deb at 10:30 AM

Very interesting! I'd never seen a miser's purse before your blog.

(& now I'm trying to remember if such a thing was ever mentioned in one of my history classes. I'm guessing not. Period clothes were rarely covered in history books written by men, but that's another rant.)