Vice is such a relative term. Today's diets veer between no fats, no carbs, no gluten, no sugar. For many of our ancestors, budget would have been a larger factor than health. Food out of season would have been impossible to get or very expensive to ship. Foods that we consider sinfully decadent like lard or heavy cream would have been relatively inexpensive and easily available.

At the moment, budget is a big factor in my cooking, both historic and modern, but I was able to find a luxurious recipe from The Court and Country Confectioner (1770) that seemed to fit this month's challenge. 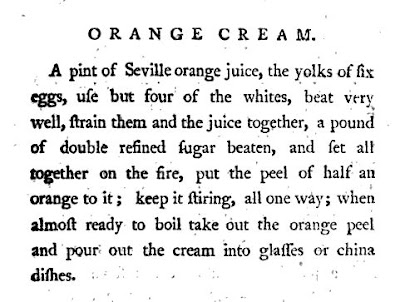 How Did You Make It: I halved the recipe, so I juiced 3 oranges to make 1 cup (1/2 pint) and stirred with 2 eggs and an extra yolk. I considered using less sugar, but went with the full half pound of granulated. I stirred it all over a double boiler with 1/4 orange peel until it set up into a thin (very, very, very thin) custard. 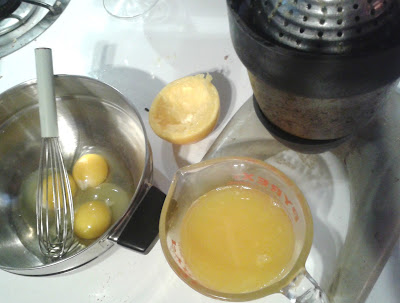 Time to Complete: I'm so bad at losing track of time when I cook. Fifteen minutes maybe?

Total Cost: Probably less than a dollar. The oranges were a gift shipped from Florida.

How Successful Was It? Not terribly. The recipe was very good about using actual measurements (1 pint of orange juice vs the juice of X oranges), so I knew I was following the ratios. For my preferences, there simply wasn't enough egg in the juice to make anything thicker than the consistency of eggnog. I had hoped for a firmer custard or something along the lines of a lemon curd. I could have definitely halved the sugar, but stuck with the recipe. LB said "That's weird" and then suggested that "we" make some shortcakes or an unsweet white cake to soak up the custard. I let it set up a bit then added some melted butter in the hopes of giving it more firmness and make it more like a curd.

How Accurate Is It? Middling. The biggest difference is that the recipe called for Seville oranges, and I used a modern hybrid. Sevilles are bitter oranges, the kind for making marmalade. I've no idea where to buy them. I otherwise followed the recipe faithfully although I opted to cook over a double boiler, having always made custards thus. I tasted the results before trying to tweak it a bit into more of something I actually wanted to eat. 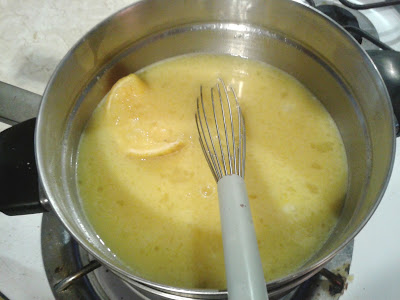 I've never seen or heard of Seville oranges being sold outside Europe or England, but apparently you can buy Seville orange trees from some specialty fruit tree nurseries ... Anyway, I did find a bottle of Seville orange juice in the Middle Eastern section of a local specialty food store. I'm just waiting for the right recipe to use it! I wonder if there was an ingredient missing, or a typo in the number of eggs in your recipe; I've found recipes with typos before, and you don't discover the typo until the recipe comes out weird and you have to fix it ...

Could you use a bit of lemon juice in it to add to the acidity and maybe make the sweet oranges more like the Seville? There may just not been enough acid in the modern oranges to react with the eggs.

I considered adding lemon, but wanted to try it plain first. Acidity doesn't affect the eggs (although it does affect milk). It's the heat that makes a custard set up. I really do think it's the ratios. A typical lemon curd recipe has about 1/2 c of juice to 4 eggs, and this had 1 c of juice to less than 3 eggs.

So far, I've enjoyed it on a warm biscuit and on pancakes.

I recently found bottled Seville orange juice in the international food aisle of a slightly upmarket grocery store -- but that was the first time I had ever seen Seville orange in anything (other than jars of marmalade) on the shelves of a local store! I haven't used it for anything yet, but I have several ideas; maybe you could find Seville orange juice in one of your local stores, or perhaps online, if you want to taste more of the original flavor (although I think regular oranges are delicious). As I remember, the label on my bottle of Seville orange juice said something about being a product of Mexico or another Latin American country.