A few months ago on my way back from a gig in Tennessee, LB and I stopped in Paducah, KY where I found this great billikin charm. 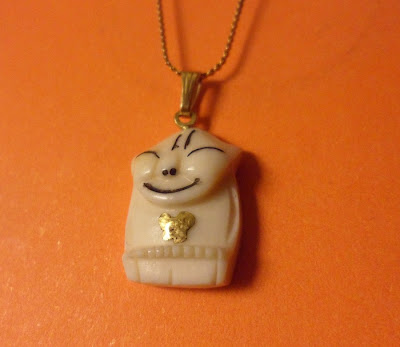 Not being from St. Louis, the woman in the antique store didn't recognize it for what it was, so I scored it for only $8. It's likely carved in Alaska from walrus ivory and has a gold nugget embedded in its belly. I was just thrilled to find it and posted this photo to Facebook.

There, someone I had never even met told me that a similar billikin charm is a recurring symbol in the film Waterloo Bridge. Wanting to check it out, I went to Netflix and ordered Waterloo Bridge. Oops, there are two versions of Waterloo Bridge, and I had accidentally requested the 1930s version, out of a collection of pre-code films. Fortunately, I'd never complain about watching a pre-code film. They're saucy! And this one even had knitting.

The heroine, a former chorus girl who now ekes out a living as a prostitute, meets a WWI soldier and resolves to change her wicked ways. To show her attempts at reform, she takes up knitting.

You can tell by her knitting technique, especially by the way she's squinting past her fag, that she's not likely to succeed. She had spoken of learning to knit socks, but she's actually working on a balaclava, a relatively sensible first project.

She knows the relationship has no future, but he badgers her into travelling to his family's estate for the weekend. Of course, he has a family estate. Of course.

His mother knits as well, and it's fun to watch the relationship between the two women. They're surprisingly frank with one another. The heroine realizes she will never really fit in to this world and flees back to her squalid little flat where she immediately snaps her yarn, rips out the needles, and unravels her project.

I won't spoil the rest, and besides, that's the end of all the knitting.

As for me, here's a teaser for a project I'm currently working on:

They're for my mother, so no spoilers please.
Posted by 7-letter Deborah, never a Deb at 2:14 PM