Shortly after first meeting my Irish boyfriend (the one who lived in Ireland, not the one who had immigrated) at a ceili, he asked me if I wanted "to go see the fill-em." I had to ask him to repeat himself three times before someone nearby took pity on the poor man and told me that the Irish pronounce "film" with two syllables.

Inspired by this slide show of the top Irish films and by a film club in Maryland of which I am a member, I have been making my way through the handful of Irish films I'd never seen and revisiting a few that I've long loved.

Irish films are great for knitwear, but when I tried to find high-quality images, I couldn't. Once again, I'm sorry for the crappy pix, but I've no clue how to take photos from the television.

First up, is Man of Aran, a quasi-documentary film from 1934, just past the silent era, made by the director of Nanook of the North.

The mother figure (it's a quasi-documentary because the director cast unrelated locals to depict a family) knits in her cottage. 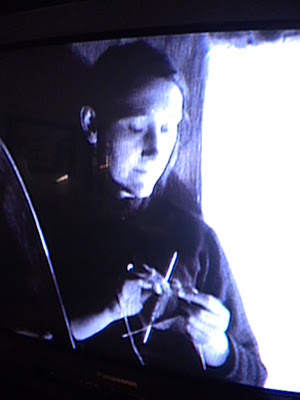 The father figure, and in fact all the men, wear tams, although they're very hard to see. They probably wear ganseys too (and most certainly not cable-knit, cream-colored dealies). 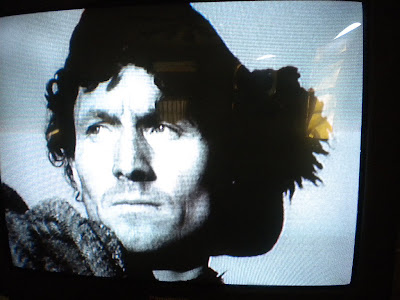 You can see the whole film here on Youtube.

My film club watched The Secret of Roan Inish, one of my favorite movies of all times. I ran out of time to get many photos, but did grab these few.

First, is the hood worn by young Fiona at her mother's funeral. You can see it around the 2:30 mark on Youtube. I can't get a great look, and bits of it really do look almost quilted, but it seems to have a double-crochet border. 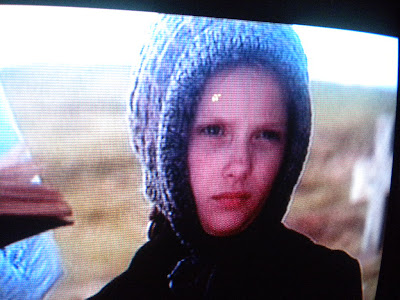 Since the film is set in post-WWII Ireland, it's not surprising to find some beautiful fair isle sweaters. 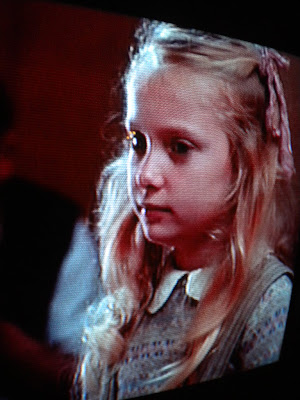 The grandmother wears some sort of crocheted capelet. For a long time, I thought she was darning a sock, but now I think she's just fussing about with a small skein of yarn. You can get a better view of it, its border, and pile of knitting/crocheted mending she's supposed to be doing at the 1:49 or 2:37 marks here. 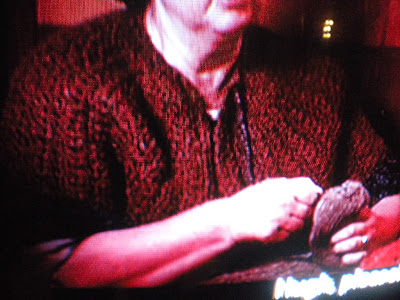 Finally, (and this brings me back to my movie date with the Irish boyfriend, which was to see The Field, appropriately enough), is this vest. I'm not entirely sure that it's knitted, but the subtitles slay me.

In this scene, part of a recounting of Fiona's ancestors, Sean Michael has been publicly shamed for daring to speak Irish. (around the 1:00 mark, here) He's forced to wear a cingulum while his schoolmates circle him and chant, according to the subtitles, "EJECT! EJECT!" 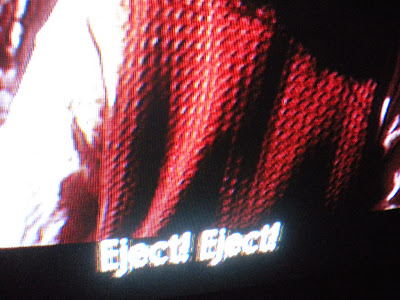 Anyone who had spent anytime among the Irish will know the real word. I'll give you a gold star if you leave a comment telling me what they're really saying
Posted by 7-letter Deborah, never a Deb at 12:56 PM

Could it be Eejit? Meaning idiot?