When I get home this evening, I really hope to find this kerchief still sitting where I left it. 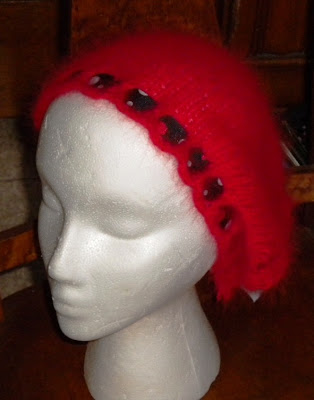 I posed it for crappy photos in the early dawn, then still half asleep, left for work, forgetting that I had left an angora kerchief in a room with a dog who looooooooves bunny rabbits. 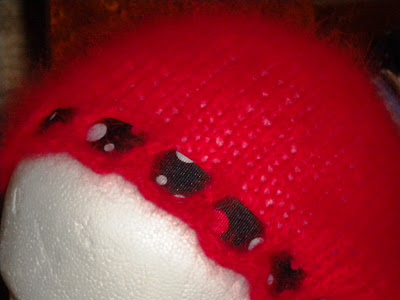 _______________
I realized this weekend, that I hadn't written about food in awhile. I'd experienced a bit of cooking languor for a few months due to a crazy schedule, but then let go of some activities and some expectations, and started going through my cooking magazines again.
With the cold snap, I harvested the last of the tomatoes, whether ripe or not. Plus, LB came home from a Civil War reenactment with a literal truckload of produce: cabbage, onions, and apples. We're not the type of people who can afford to turn down free food.
I generally try not to freeze stuff--meals that goes into the freezer never seem to come back out, but I'm giving it a shot--I made and froze applesauce, tomato sauce, and caramelized onions.* I do better with frozen ingredients (onions and peppers can just be chopped and frozen; I also pre-cook and freeze rice) than I do with entire meals.
The apples were the easiest to use up: applesauce, apple pancake, chopped apples in oatmeal, apple crisps, apple custard pies, apple tarts, and more. I've only got eight leathery apples left.

The cabbage has been harder. We've had Bavarian cabbage (a vinegary cabbage w/ onions and apples--a threepeat!!), fennel/cabbage salad (also with chopped onion and apple), cabbage and knackwurst. I also foisted at least two cabbages on everyone who crossed our threshold. I have three wilty heads left.

Next week will be onion week. I still have more than a bushel to go.


*To caramelize onions, slice as many as will fit in your slow cooker, add about 3 T or less of olive oil and cook on high for 11 hours. Freeze or turn into French onion soup.
Posted by 7-letter Deborah, never a Deb at 11:25 AM

Awww, Steu would never hurt the bunny kerchief, but he might destroy that styrofoam head just for monopolizing HIS bunny!

Here...knit the little darling a bunny for Christmas

Have you ever made sauerkraut? I need to try it someday.

That's a great tip for caramelizing onions in the crock pot!