A few days ago, my stoner neighbor gave me a gallon Ziploc bag of lumps of acrylic yarn, which she'd gotten from her stoner neighbor. He's a cook in a retirement home and probably got it there, although why he didn't just leave it there I'll never know.


I call her my stoner neighbor because she's on a million prescription drugs for a chronic kidney condition, plus she's a regular user if medicinal marijuana. Her neighbor in the four-flat, on the other hand, is just a stoner. He's a least quieter than the alcoholic dad and his hoarder wife in the third unit though, and none of them are anywhere near as bad as the junkies in the fourth unit. I'm tellin' ya, it's the House of Crazy.


I was going to take the yarn to guild and donate it, but really, there were just little knots of yarn, enough for a few stripes, but not enough of any color for any single project.


I decided to do the multi-directional diagonal scarf and I have to say, I'm pretty happy. 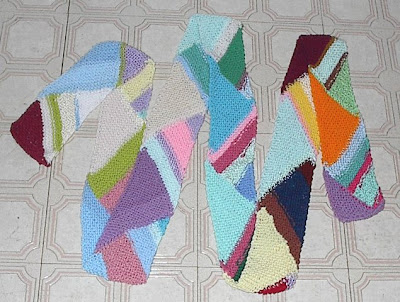 That's my neighbor's kitchen floor and I think those are either 6" or 8" tiles. Clearly I headed into Dr. Who territory with this scarf. It's at least 11 feet long.

I know it's a pretty funky, crazy project, but given that it's for my neighbor, I think it's just about right.

That's a lot of scarf! You didn't breathe the air in your neighbors' house, did you? :)

Now that's an inspiring use of junk!!