I pulled out all my red or red and white knitting for today, opening day of baseball season, and finally settled on red and white socks (Regia Nation Color). I've downloaded and printed the schedule, noted the televised games on my calendar, and programmed the AM station into my new car stereo. I'm good to go. 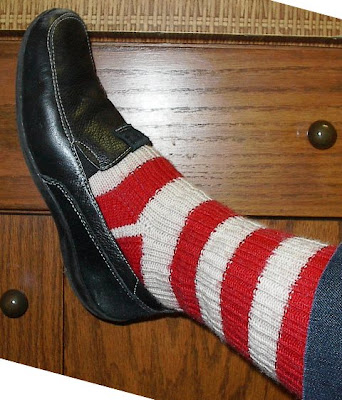 I'm working on a project for an upcoming swap, but I don't know if she reads my blog, so all swap posting will have to wait. Let's just say it's a Hello Kitty swap and I'm super excited.

The service learning project went really well. My cell phone rang off the hook for almost two hours, but pretty much everyone made it downtown just fine. My two sections worked really well together.

The highlights or lowlights, depending on how I look at things-- 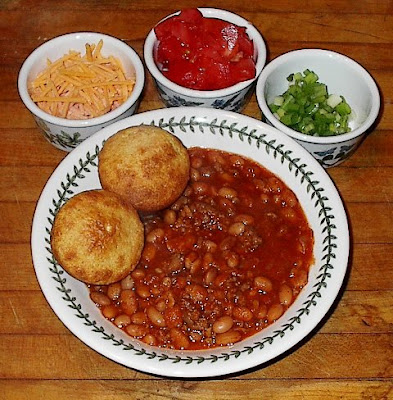 Cooking: Barry Goldwater's chili recipe from Not Your Mother's Slow Cooker and Corn Muffins from Tricia Foley's Having Tea. I've been having a terrible time finding a cornbread recipe on which LB and I can agree. People have definite tastes in corn bread, and it's not entirely rational: degrees of sweetness, ratio of corn meal to flour, white or yellow corn meal, shape, texture, etc. This recipe was sweeted with maple syrup (Fair Shares), got a dash of cayenne, and had a 1/4 cup of rolled oats in it for a great chew. LB approved for once.
Posted by 7-letter Deborah, never a Deb at 1:04 PM

Great use of the red and white! I keep intending to do a stranded motif, when I get around to learning stranded knitting. In the meantime, I just wore a red sweater today and am listening to the game here at work (it's the quietest my office has ever been :-D)

I have a cornbread recipe I'd be happy to share--it's a "good the second day" cornbread, which I find to be rare.