On socks, I actually use more stitch markers than most people. The general public tends to use just one marker to indicate the beginning of the round. Because of the way I knit socks, I use an additional two, marking the sides of the sock as well.

Instead of dividing the heel stitches on two needles and keeping the instep stitches on one, I divide my stitches evenly and use stitch markers to indicate the breaks. I also transfer the last worked stitch on my right-hand needle onto a free needle to begin working on the new left-hand needle.

I find this technique stabilizes my needles, helps me avoid ladders, and prevents a lot of strain at the corners on the instep. My stitches literally* spiral about on the needles. 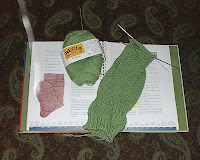 For the longest time, I couldn't see the point of lovely stitch markers. People were going crazy for them on etsy and buying them by the gross, it seemed like. I'd always just used a bit of yarn or some plastic ones I'd inherited. 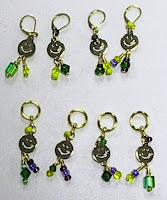 Then I found Suzanne's markers, which she sells at Knitorious. I bought one Stitch-n-Pitch-themed marker, then about 16 Mardi Gras markers, which I've been hoarding. I've also given a few of Suzanne's markers as birthday presents. I asked Suzanne to work an orphaned earring into a stitch marker, and I've just ordered a bunch of charms on ebay for an upcoming themed knitting swap. I'm clearly hooked.

Suzanne's markers are not the split-rings or jump-rings I've seen elsewhere. Hers are a solid ring, and the beadwork displays her wonderfully creative colorwork.

These current socks, my bright green socks, I've taken to thinking of as my St. Patrick's Day socks. I'm currently fighting the urge to buy one of Suzanne's shamrock markers specifically for working on these socks. I don't know how much longer I can hold out.
__________________ 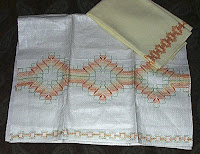 Speaking of colorwork, the lovely and talented Anna Allen remembered that I collect huck towels and found these lovelies for me. I've been slow to change the towels, but these colors have inspired me to think of the daffodils that are forcing their way up in the yard. Later today, I'll be swapping out the old towels for some sunshiny yellow ones.

Thanks Anna!
___________
Today's grammar note: Watch out for that word "literally." Literally means "actually" in the sense of "strictly speaking." People use it as an intensifier though, which leads to unintentionally funny sentences like "My head is literally exploding!" Don't be that person.
Posted by 7-letter Deborah, never a Deb at 2:20 PM

Your blog has literally given me an entirely new appreciation of Swedish embroidery!