Lest the time escape ...

On Nov. 1, we went down to Cherokee Street for the local Day of the Dead celebration. All the bodegas (grocers), panaderias (bakeries), and other stores had ofrendas (altars with all kinds of offerings--sugar skulls, rum, marigolds, sweets, cigarettes, and candles) up.

Actually, not all of the merchants. Cherokee Street is a district mixed with Hispanic stores, White punk-rocker stores (like Firecracker Press and Black Bear Bakery), African-pride stores, and White-owned antique stores. The first two had ofrendas; the last two most decidedly did not.

We ate some free pan de muerto. The one on the left is the traditional round disk with "bones" and the one on the right is a little man.

We drank some agua de fresa and ate Mexican food. 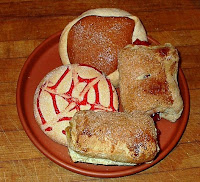 We bought tamales to take home and a bag of postres (pastries). I love many things about Mexican food, but pastries is not really one of them. We bought them in thanks for the pan de muerto. They look pretty tasty, but were very dry. 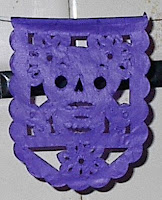 We bought some more papel picado.
I think I like Day of the Dead much more than Halloween.
I did not expect to see any knitting on Cherokee street, but there she was, a version of La Catrina in a shop window, knitting away on some recycled silk. 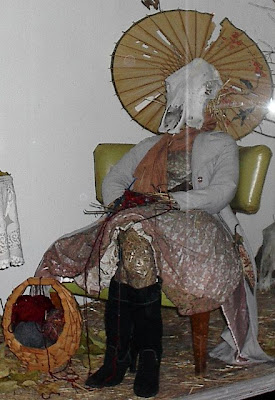 Now I know that I love Day of the Dead better than Halloween.
Posted by 7-letter Deborah, never a Deb at 1:26 PM