In Which I Exult, and Whine Just a Bit

At Saturday's guild meeting, I learned illusion knitting.
In which this: 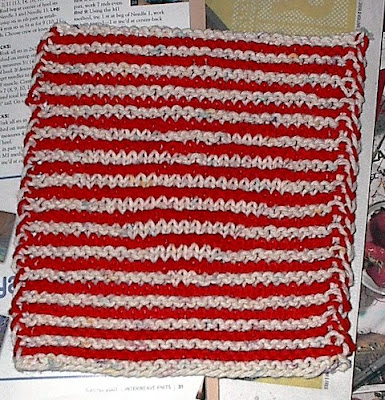 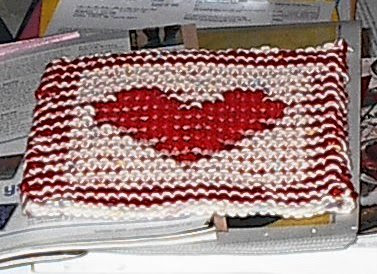 There's no trick to the knitting, of course, just to the designing, but since my brain simply could not intuit how it all worked, I wanted to be with a group of fellow knitters while the magic happened.
Last night, I gave the project to my stoner neighbor. When I left her, she was tilting the dishcloth this way and that. I believe I heard a long, drawn out "Woah!" Let's just say that it was a perfect match of gift and recipient.
I also had an exultant kitchen moment this weekend. With our Fair Share, I'd made a beer can roasted chicken and used the cider to make a BBQ sauce. Yummy, but I've done that before. What was different this time was what I did with the leftovers, and some more Fair Share stuff.
I thickened the BBQ sauce (cider and onions from CSA) with a tablespoon of instant tapioca. I toasted the baguette from the CSA, spread it with the BBQ sauce, topped it with leftover CSA chicken, and shredded some CSA gouda over it all. I sprinkled on some golden onions & BBQ 3000 seasoning from Penzy's and baked until the cheese melted and browned.
Aside from the tapioca and spices, nearly the whole thing came from the CSA. It was so good, LB asked for seconds, even after telling me he wasn't hungry, and then ate the leftovers as well. I've really struggled to use up the CSA bread and was glad to see this baguette wasn't Companion. It was Black Bear, whom LB has worked for in the past.
Here's the whining. Didn't that BBQ chicken pizza sound amazing? Make you drool?
The photo (from my crappy camera, which I dropped again this morning, chipping off yet another piece of plastic) does not even begin to do the dish justice. In fact, the photo makes it look totally unappetizing, like one of those horrible microwavable french bread pizzas. 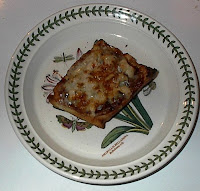 Let's just keep it small, shall we? You'll just have to trust me that it tasted good.
Posted by 7-letter Deborah, never a Deb at 10:00 AM

The chicken dish sounds great! I am off of fairshares now, but still have quite a bit of pantry stuff (and squash) to use up.

I wish I had a stoner neighbor, instead of a drug dealer neighbor.