I'm really sorry about the lack of updates. It was just too busy. I only broke down and cried once, this morning, about a student athlete w/ ADD whom I had to fail. I fail students all the time, but rarely cry over it. Then I read his final exam and decided he really did deserve to fail. Tears gone. They were really more about other stuff anyway.

I can't seem to find my "favorite" sentence. It was something like "Hybrid cars are very similar to regular cars in a lot of different ways." This one will have to do for now: "Due to the bad history of DDT, it was banned because of the book Silent Spring which swept the nation on the harmful effects it has on the environment." Is blood coming out of my ears?

I have actually been knitting tons and tons, partly to keep me glued to my grading (I can knit and read). Every time I hit a knitting stumbling block or a spot that demanded attention, I'd simply cast on a new project. Hence, I've got the back and am ready to divide for the front on a cotton tee in Plymouth Bella Colour. 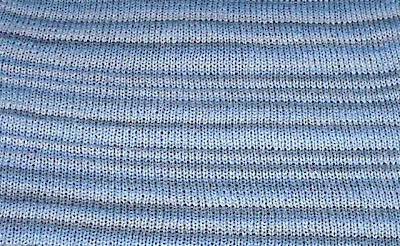 I have knit about 4.5" of the back of a cropped jacket in Classic Elite Calliope. I considered and rejected this colorway about six times, then went for it. For me, pastels are a daring choice. 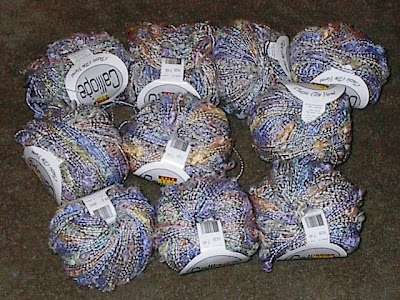 I also have been knitting socks for LB. The pattern is a variation on the Gentleman's Sock in Plain Knitting by Nancy Bush, but something is seriously wrong with the heel. It's sliding way down his foot. I continued the ribbed cuff down the legs and across the top of the foot, which distorts the sock when flat, but I can't figure out what's really wrong. The yarn is Sockotta. I've knit this sock before, in Trekking XXL, and it fit great. 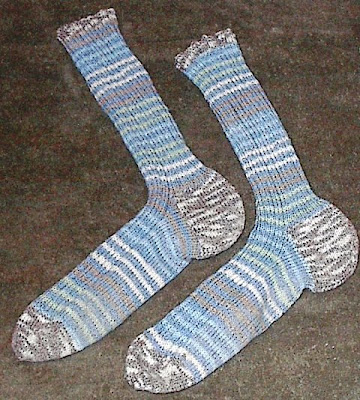 I will probably have to rip both all the way back to the heels and re-do.

Facing that failure, on Friday I cast on and knit one Mardi Gras sock in Trekking XXL. The pattern is the Oak Ribbed Sock by Nancy Bush. 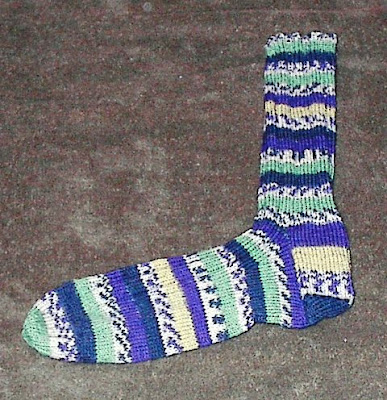 There was a bit of junking recently. 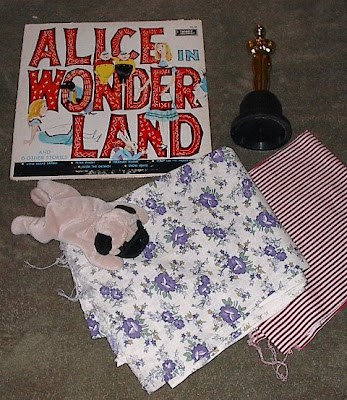 Finally, it's our week for Fair Shares. Just in time for me to go into a frenzy of grading-induced carry-outs and a weekend on the road. Our haul: 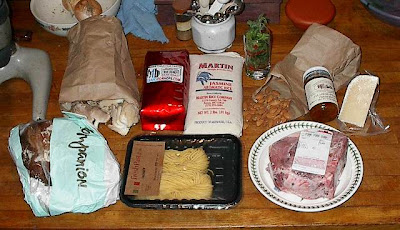 The cheese, almonds, and bread will travel with us this weekend to a reenactment. I foresee a pasta with mushroom cream sauce and a salad for dinner tonight. I'll think about the rest of it when I get back on Monday.
Posted by 7-letter Deborah, never a Deb at 6:36 PM

What?!? You got pasta? Somehow that was left out of my share.

So sorry for the absolutely terrible students, btw!

Hmm, where to start as I have hardly seen you at all this week. That cheese, if it's the hard one we got last week, is great grated on pasta. Very Parmesan-ish. Yes there is a trickle, right there under your jaw line ; ). You are a prolific sock knitter... way moreso than I am lately. I want to see the Caliope knit up. I think I couldn't have knit and graded -- I had to do way too much writing on my grading.

I wish we could all hear some of that Alice record! What a find!