Philosophical blogs, to a degree, are inherently more interesting than non-philosophical blogs. I'd rather read about someone's reflections on knitting or cooking or life than read about making tacos and rearranging furniture or even just "here's what I knit and here's another thing I knit." At least a small degree of humor or self-reflection seems to be a courtesy to one's readers.

The trouble is, I've been busy, really busy, and it's left me philosophically deficient.

I had a doctor's appointment* yesterday with an acupuncturist to deal with some trouble I've been having with my eye and teeth. It's been a bit scary and stressful, and I was willing to buy into almost all of it, right up until he told me I might have a yin deficiency.

Actually, I was willing to buy into that too, largely because I had no idea what it meant. When he went on to explain that my womb might need energizing, I had a hard time keeping a straight face.

Really, as long as no actual birthing is involved, who isn't in favor of having her womb energized? I'll try to get right on that.

Knitting, he said, was actually good for my yin. 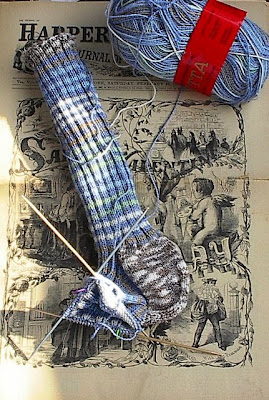 I can think of a whole lot more fun ways to energize my womb, but I guess we take what we can get.