Just a few minutes to squeak in before I have to hit the road for a particularly grueling weekend of being a rock star. The Saturday night one should be a hoot--I'm performing for the national association of Lincoln look-alikes. I know they don't call themselves that, but I'm looking forward to a room full of Abes. Not surprisingly, a documentary filmmaker will be there, so maybe I'll get to be a movie star too. 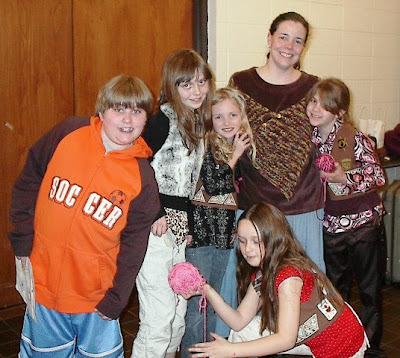 I talked to a troop of twelve Brownies last week about knitting for their hobby badge. I owe my mother a gigantic "thank you." I went home and poured myself a cocktail the size of my head and thanked heavens I've never reproduced. My mother, who ran a brownie troop for many years, was clearly much more of a saint than I ever realized.

One would ask how silk was made, then the next would want to share a story of how she saw a caterpillar once. It went on from there.


We finished up with some finger knitting, thanks to Annie who taught me a quick lesson in the shop. I was in such a rush that I never learned how to cast off, so she also answered a frantic phone call from me. As an added bonus, I was able to get rid of a lot of little balls of pink yarn.


I was worried they hadn't had a good time, as we only got about 5 or 6 rows of finger knitting done before it was time to move on to planting pansies in peat pots, and there had been quite a bit of whining about, "I can't get it."


Then, this week I got a car from the troop with lots of little scrawled "thank yous" from the girls and a note on the back from one of the mothers that said, "My brownie had made three headbands already and took her knitting to the zoo this weekend and knitted as we walked around."

Clearly, my mother must have rubbed off on me.

And I took away the following deep moral lesson, learned when there was a bit of squabbling over the distribution of the various pink yarns. In the words of one brownie leader and then repeated by the troop as a whole,

Great photo. I'm glad it went off ok for you. I heard about the Abes on the radio and figured you'd be involved somehow...