Knitting first: I finished the first Gentleman's Fancy Sock in mocha Regia Silk yesterday,* doing the best I could to kitchener in the darkness of the gelateria. Folks, if you want people to spend time in your eating establishment, it wouldn't hurt to give some light. It was so dark that I actually got up and moved a torcher about 8 feet closer.

I also finished the Wisp and am withholding judgement until the thing is blocked. At the moment, I'm disappointed and have wadded it up in a ball. At least it looks pretty next to the pussy willow. 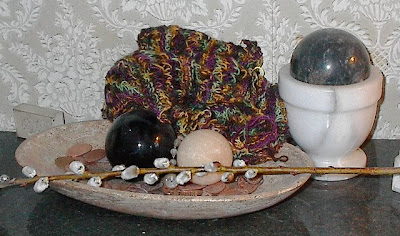 LB, bless his heart, said, "Maybe it's not supposed to be perfect?" when I asked him to straighten out the back in an abortive fitting. Looking at the schematic now, I also see I hadn't buttoned it correctly. That helps a bit.

Part of my concern is the length. When I first knit it and was measuring while patting it flat, I had added three more pattern repeats to get the 50" length. Trust the designer when she says 17 repeats. The other problem I have is that the photograph of the cast on and bind off edges for the blue version does not quite match the instructions. I like the photographed version, but to get it, I would have to completely rip and reknit.

This weekend I also got to do some junking: 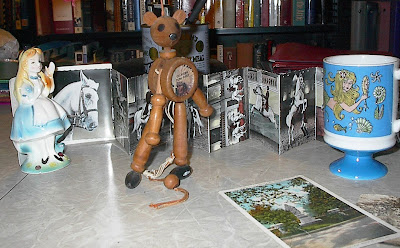 The scores, clockwise from left are as follows:

And I also finally got my Xmas present from my MIL, which included this rhinestone bracelet: 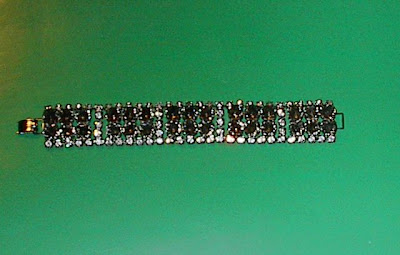 I've worn it every day since, constructing my outfits around it. I've found though, that rhinestone bracelets and lacy knitwear are not a harmonious combination in that the prongs catch and snag.

*for the second time, actually. I had knit to the toe, ripped back to heel and reknit with a larger needle. In the meantime while waiting on LB for another fitting, I began on its mate, so I'm past the heel on that one as well.
Posted by 7-letter Deborah, never a Deb at 12:06 PM

You have an Ab Fab eye for the junk. The Lipizzaner fold-out is fantastic!

I love it when writers use the word "twee"! It's one of my favorite odd words.