Spring break #1 is over and spring break #2 has just begun. This doesn't really mean that I have two weeks off. It actually means that, because the two breaks don't overlap, that I have no time off. I also have no idea what's on my to-do list. I've started thinking about August to avoid having to think about March.
Even then, I should be thinking about confections, but instead I'm obsessing about the Missouri Leviathan. Something about a huckster travelling about in 1842 with mastodon bones dug up just a few miles from where LB and I met calls to me.
I am also going nuts over the Mystical Creations Yarn saga. I was on page 111 (about message 2,750) out of 128 pages when the server crashed, probably from so many Ravellers unable to stay off the boards.
This weekend LB and I went camping down near New Madrid, MO. We didn't get in to tour the Hunter-Dawson home until Sunday, but it was even lovelier than I had suspected. We'd been trying to see it for several years and even stopped in on our honeymoon but never found it open.

Later, we went to Big Oak Park and Towosahgy State Historic Site. I have to say, the state really must not want folks to visit these sites. Even with a gazeteer, we got pretty lost. There were no signs until we stumbled across the actual park entrances. 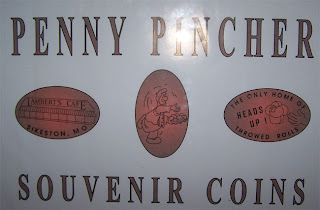 I also came home with a flat tire, a pile of dirty laundry, a wet tent, a wee bit of food poisoning, and a cranky husband whom I love for being willing to drive down dirt roads and empty his change pocket just to meet my whims.
Posted by 7-letter Deborah, never a Deb at 1:06 PM

My sister-in-law just emailed to say Farmer Takes a Wife is premiering in April!

Elongated Coins! I love those and have a small collection of them. No matter how broke I am I can always afford an EC as a memento. You are even cooler than I thought I you were.

7-letter Deborah, never a Deb said...
This comment has been removed by the author.
5:30 PM

I have about 80. Given their cost, they make me disporpotionately happy :)