Yesterday afternoon I ran across a passing reference to a scarf, which sent me to look at the pattern and then to Ravelry to see all the FOs.*


I saw several that I liked, but the one that lingered in my mind was this one by pikelet. She doesn't seem to have photos of it on her blog, so I hope it's okay to show it here: 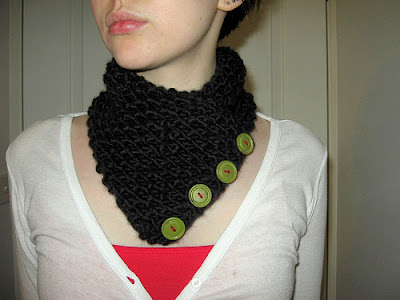 I love the way the red thread and the olive buttons pop against the black wool. Love it!


So I zipped upstairs and shivered in my sewing room in search of 100 yards of bulky yarn before the cold forced me to settle for this cheap stuff from JoAnn's: 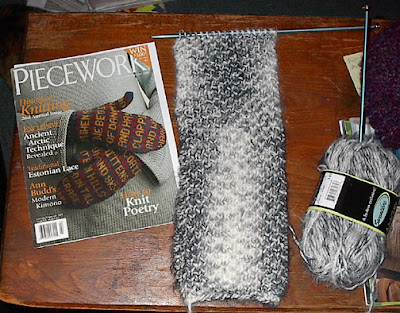 I'm not crazy about how it's pooling, but I'll either live with it or donate it to charity.

I'll definitely make this pattern again, since what you see here was cast on at 6:00 pm yesterday, ripped 3 times just for grins and then worked on until about 8:15 that same evening. Practically instant gratification.

I'm a bit torn though--I thought I might like to treat myself to some "real" yarn from my LYS, since the project only needs about 100 yards. I shouldn't have been surprised to realize that most of the prettier bulky yarns come in 60-yard balls. There's something about buying that second ball that makes me feel guilty. I'd be looking at a $16 to $28 scarf, not counting the cost of buttons.

Maybe, just maybe, since I am finally getting a tax refund, I may deserve some nice bulky for my next fidget. Of course, the reason I'm getting a tax refund is that last year I made about half of what I had earned in 2006. Apparently, being a big rock star doesn't pay very well.

*Ann says this is a sign that I don't want to grade, and while she may be right, she may also be glad to know that I graded about 14 papers today. So there!

I like it, too, but I have a very very short neck. I'm afraid it would bunch up on me, but then, they all do.

Holy Crap! 14? I know that's hours. You are hereby allotted an equal amount of diddling around time. You can thank me later...