Probably the one search that bring the most strangers here is "Civil War sontag pattern."
Sorry, I've made a Civil War sontag, but as of yet, I don't have a pattern. I also feel that the one pattern that is out there is over-represented. It's a very good pattern, but it's the one that everyone makes. As a result, a good-sized, cool-weather reenactment tends to have about twelve women wearing a sontag in exactly the same basket-weave pattern.
Period photographs show lots of different sontag designs and stitch patterns, both in knit and crochet. 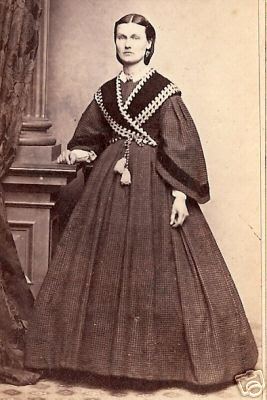 If you want to make a Civil War sontag, you would be doing a service to the hobby by copying a photographed pattern, but the other one is worthy as well.

Thank you for the info. I have been knitting for less than a year and I want to make one of these for when I go as a Civilian Corp member. Can you give me information about the more authentic and accurate pattern which you briefly mention. Thank you so much. My husband will be a sketch artist for the person whose persona is a newspaper reporter and I will be a member of the Ladies Aide Society

I link to a few patterns, but find the fit not great.