I had every intention of returning to the scarf I'd begun from my NYC souvenir yarn. I realized I somehow had zigged when I should have zagged, and it's been sitting there for the last four or so months.
On Monday, I had to set aside the hemp tank top when I realized that I needed to figure out where to place the short rows. In other words, I have to figure out where my boobs go, and who really wants to face that issue?
Before I knew it, I'd cast on for something new. The yarn at least came out of my stash, but I'm about 60 rows into it and have realized I need to figure out how to space the increases.
I know now why so many Civil War images show women knitting socks. Depending on the sock pattern, one hardly has to think.
____________________
A few days ago, I posted an image of a CW woman wearing some knitted undersleeves. Here's a pair that I knit some time back. 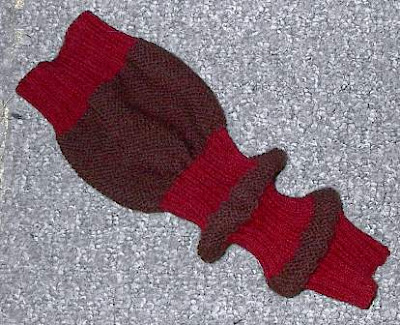 The kit (Brown Sheep yarn and pattern and historic notes) came from Robin Stokes.
_____________
*The latest MLA standard for capitalization says that the "to" of an infinitive should not be capitalized.
Posted by 7-letter Deborah, never a Deb at 4:20 PM

Thank you for the class tips, Deborah. Knitorious is always closed when I drive by, but I'll try harder. I've been making socks out of cotton dishcloth yarn for practice and am almost ready to go for that fancy self-striping stuff sold at Meyer House. Your stuff is inspirational, those sleeves are so cool!

If you can do socks out of cotton dishcloth yarn, you can do the fancy self-striping stuff! I'll let you in on a little secret. The self-striping yarn does all the work. You might even find it boring to knit after awhile. Just knit around & the stripes will do their thing all on their own.