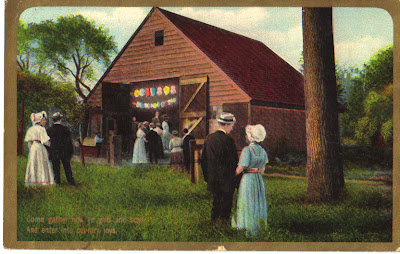 Yesterday was the final night of filming. Other than that they didn't rent the costumes after all, it went way better than I expected. I know ten years ago, I couldn't have pulled it off. The whole thing was trippy, and the band was simply amazing.

I was fine with all the cameras swooping around or zooming in. What really freaked me out was looking up at different times and seeing crew members taking photos of me with their cell phones.* Those were definitely "rock star" moments, and they always catch me off guard.

I'd say the whole evening was one of the high points of my life--not so much the filming part, but the music, the setting, the dancers, and the exceeding of everyone's expectations, even my own. There were times when the whole room was just vibrating with the music, the calls, and beat of the dancers' feet. Regardless of how they edit it, whatever freakish spin they put on it, I'm pleased with my part in making those moments happen.
We returned home around midnight to find that Double (aka BunBun, Bunny Girl, DumbDumb, Miss Tiny, or The Moving Ornament) had suffered a stroke. I spent the night on the floor with her, petting her, comforting her when she panicked, and waiting for the vet's office to open in the morning.
BunBun was nineteen and had seen me through my senior year in college, countless breakups, a cross-country move, graduate school, a marriage. At about two weeks old, she had been dumped off at the stable where I rode, and both she and her brother were so small they could both fit in my riding helmet. She almost died two days after I brought her home, but was otherwise pretty healthy all her life.
When she was a kitten, she'd burrow under the covers or in the hamper to sleep. She loved LB and her favorite place to sleep was on his chest or wedged between us. He would sleep, stiff-as-a-board, her stiletto feet slipping between his ribs, because he was always too kind-hearted to move her. On those nights, I always called her The Succubus.
She was a real trooper about all the foster pets that came through our home and tolerated them all. She didn't love a one of them, but as long as they left her alone, she deigned to ignore them. Eight-pounds at her heaviest, she once chased a rottweiler out of our yard. About two years ago, she'd finally had enough and decided she wanted to move upstairs to be by herself. Even though it meant no heat and our company only at night, she'd have no more of kittens in her life.
She wasn't terribly bright, but there's really something to be said for that in a pet. She never did any tricks but never had any discipline problems either. All in all, she was a just a regular old cat: sweet-natured, loving but not needy, serene.
She was my good girl. Oh, Deborah. I'm so sorry for your loss.

You have had the bitter and sweet haven't you? I'm thrilled about your "rock star" experience. Congratulations. About your sweet baby, I'm so sorry. There is an emptiness that cannot be filled at this time. My thoughts are with you and LB. Be kind to yourselves.

So sorry to hear about BunBun.

BunBun sounds like she was a real sweetheart. You gave her a good home & helped her live a good, long life for a cat.

I'm sorry for your loss.