I had a gig in Monroe City on Saturday night, so LB and I wended our leisurely way up 79 that morning, reconnecting and exploring.

We stopped at the new Cabelas (scored a pressed penny), which is chock full of the largest displays of dead animals you've ever seen. There is a two-story mountain of taxidermy in the middle of the store with everything from the common (raccoons, deer), to the exotic (martin, wolverine), to the who-the-hell-would-pay-to-stuff-those-things (prairie dogs). We then saw some of the real live stuff at Clarence Cannon wildlife refuge, one of my favorite haunts. This time there were literally scores of egrets, a dozen herons, three deer, a few wood ducks, and a mature bald eagle sitting in a tree. In Winfield, I scored a tiny Longaberger basket and we ate roadside BBQ from our favorites, Fat Texans'.

We ate more pulled pork for dinner and the gig itself went well.

Sunday was the major score day. I don't have a whole lot of discretionary spending money, but managed this haul in Perry, a great town for antiquing. 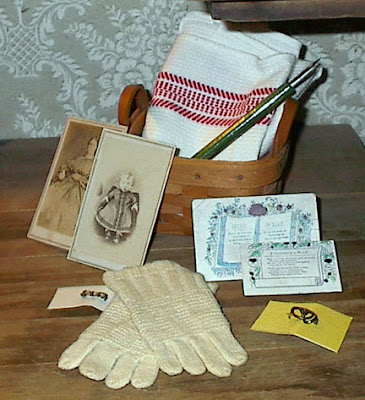 The haul (clockwise from the top):

I also found these little cuties in Perry. The dolphins have blue rhinestones for eyes and the whole thing has a sort of pearly sheen. I have a friend (I'm pretty sure she doesn't read this blog) who collects kitchy mermaids, and these will make a fabu Christmas present. Britton--you're sworn to secrecy.

The gloves were knit flat on 48 stitches, with a gauge of 12 stitches to the inch. The border is interesting. At first it looks like garter stitch, but a look at the back reveals that it's rows of k1p1 alternating with rows of k. After the border, comes an inch or so of k2p2 ribbing. The hands are done in garter stitch with a decorative element of 4 columns, each made by knit stitches, on the back. The fingers are done in stockinette.

All in all, a good haul.