The Babies' Are the Saddest

I'm about four months behind in my charity hat production, which means it's time for preemie hats. A hat's a hat, and preemies need all the hand-knit love this world has to offer. 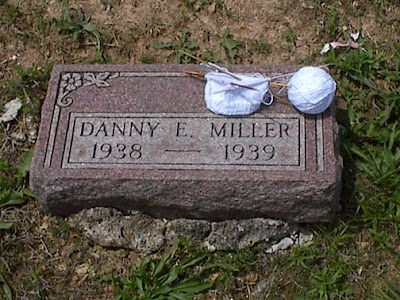 Today was a cemetery day. I stopped at five different cemeteries today. Some were funny, some were historic, and some were very sad.

The babies' graves were the saddest: "Lived 2 hours," "Twin sister of Cynthia," "Infant son." The babies' graves are usually tucked into a corner of the cemetery, with the stones very close together. Sometimes there was one child after another, all with the same last name, each just a few years apart. I can't even imagine the anguish of their mothers in the days before neonatal ICUs.

The funniest grave was actually in the front yard of a ranch house near Potosi, MO. I somehow managed to lose most of the photos, but there were two enormous bulls, life sized, one white and one red and white. In the middle was the grave of Daley Nicholson, owner of Nicholson farms, the granite marker carved with a bull and a tractor trailer. Plastic flowers and wind chimes were everywhere. 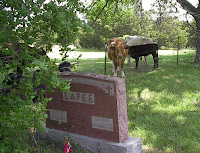 After going about 25 miles out of my way (12 of that on a gravel road) in search of an 1830s stone furnace chimney for smelting pig lead (never found it), I saw real cows at another cemetery. One of the tombstones was actually on their side of the fence.

At this point, I was in Richwoods, MO, a town I'd never been to before. I had bypassed the Old Mines cemeteries, which I've often visited, in favor of a new experience.

Guess who was here? Toussaint Charbonneau,* guide to Lewis and Clark and husband to Sacajawea. Another woman, some white woman, one he hadn't bought and paid for, was buried next to him. In Potosi, I'd seen the grave of Moses Austen, father of Stephen, and at Richwood's Protestant Cemetery was a grave of a man who had been born in Switzerland in 1763. 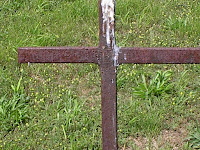 One of the things I love about the Old Mines cemetery is the iron crosses. There were only a few in the Richwoods Catholic cemetery, and they weren't as elaborate as in Old Mines, but this one had the man's name hammered into it. The others were all nameless.

I know cemeteries are supposed to be sad places, but I love visiting them. I love to figure out the iconography through all the lichens: veiled urns, clasped hands, sleeping lambs, pointing fingers, linked chains, open gates. By the dates, I can guess which woman died in childbirth, which teen died in a car wreck, which soldier was killed in action, or I can track an epidemic. There are husbands and wives who have picked their plot and had their marker engraved, leaving parts blank because neither has yet died.

And there's some grandmas who were very, very loved.

*There's some disagreement about whether this is, in fact, the same guy.
Posted by 7-letter Deborah, never a Deb at 5:00 PM

I have always been fascinated by cemetaries. They are a walk-by history lesson and if you walk your own history, WOW. We often visit the family cemetaries in Wisconsin (my Mom's home state). Thanks for another cool lesson.

This is probably because I spent many of my summers hitting cemetaries in Oklahoma and Arkansas while on genealogy sidetrips with my mom.

Sadly, I don't make it to many cemetaries these days...

P.S. One of my grandfathers once moved a small cemetary that was inconveniently situated on his farmland...we're pretty sure he only moved the headstones. He did make sure to line up the headstones all nice and neat when he moved them.