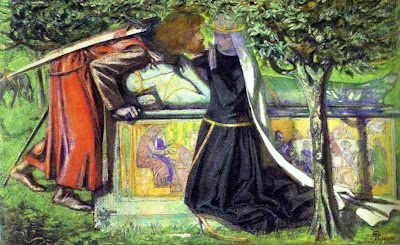 Each May, Kalamazoo, MI plays host to a truly gigantic international conference of medieval scholars. Around 3,000 scholars show up every year to present papers, peruse the book displays, weary nerdy shoes, and grope each other during the Saturday night dance, aka geek prom.*

I'm not technically a medievalist, someone who studies the middle ages. I'm a medievalismist, a word I coined** for someone who studies the medieval revival. In other words, I study the modern people who write about or paint the middle ages, like Tennyson or Swinburne, Dore or Waterhouse. I pretty much stay focused on nineteenth-century England, like Rossetti's painting above, Arthur's Tomb.***

There's not a whole lot of medievalism sessions at K'zoo, so for the past few years I've also been going to the DISTAFF sessions. DISTAFF (Discussion, Interpretation, and Study of Textile Arts, Fabrics,and Fashion) is an odd group even among medievalists, and they tend to have a lot of independent scholars, but I find them charming.
They organize a huge number of sessions and a very popular yearly fashion show. Best of all, it's very likely that people will be knitting in the audience and there have been papers on netting and nalbinding.
I can't go this year, and likely none of you are either, but it's fun to see what papers they're sponsoring:
Dress and Textiles I: Clothing and Politics

Dress and Textiles II: Fabrics in Text and Life

Dress and Textiles III: Dress in Art and Life

Costume in Chaucer, with an Emphasis on Griselde:

A display of reproduction textile and dress items, handmade using medieval methods and materials. Items will include textiles, decorative treatments, garments, and dress accessories. Exhibitors will demonstrate techniques and be available to discuss the use of historic evidence in reproducing artifacts of material culture.

OTHER SESSIONS AND PAPERS OF INTEREST

**I can say this because I'm an English teacher and can get away with such nonsense. Also, it wouldn't really be a scholarly article if it didn't have footnotes, would it?

***And don't even dream of mentioning the SCA to anyone at the congress, lest you get the withering sneer of doom.

Hey, Deb, I doubt I ever attend that conference, but I enjoyed reading your take on it!