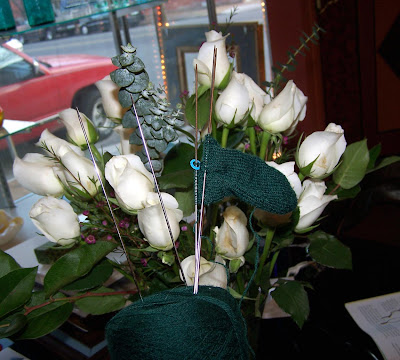 No, it's not a winkie warmer.

It's the miser's purse from the January Piecework.

A miser's purse is a very cool thing. Basically, it's a tube with both ends closed. The opening is a longways slit in the middle. The weight of the coins, combined with two sliding rings, keeps the contents safe.

Really, I did have to rip many, many times over the course of three days. Now that I'm done with the increases, it's working up reasonably quickly, and I was even able to recover from accidentally pulling out one of the needles.

Tomorrow, I'll try to post some photos of period miser's purses, but I thought I would work on this one so that I'd have a work in progress to show for my lecture on Civil War knitting on Wednesday.

Plus it's teaching me humility.
Posted by 7-letter Deborah, never a Deb at 5:20 PM