A few weeks ago, like three maybe, I was contacted about finding two Irish bands each willing to play a fifteen-minute set at a poetry reading on St. Patrick's Day, performing in exchange for food and beer.
As the Irish say, Jayzus!
First, any reasonably competent Irish band has been booked for the last nine months or more. You want not just one, but two?
Second, it's hardly worth the effort to unload the sound system for a 15-minute set.

On top of all that, you're asking them to play essentially for free? On the one night a year they're guaranteed a paying gig?
I made a good faith effort, with no luck. Most musicians laughed in my face, yet somehow the organizer managed to book someone, and I admit to being a bit curious to see what dregs he scraped up.
If I didn't already have a gig in Elsah, I'd stop in to see.
I might even celebrate by drinking Jamieson while wearing orange, just to confuse things.* 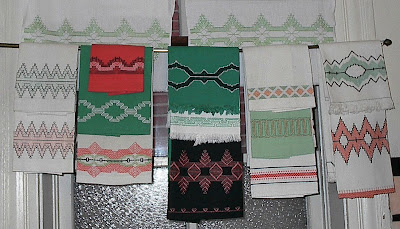 * gold star to the first person, besides my sister, who can tell me why this behaviour would be confusing.
Posted by 7-letter Deborah, never a Deb at 1:11 PM

You and I are both Protestant Irish. Tip o' the hat to ya.

Silver star to Cindy anyway. I'm actually Irish Catholic--hence the Jamie. But you're right, orange is for protestants, as is Bushmill's.

I was ordered (by my Limey boss, no less) to wear green to work tomorrow. I insisted I would wear blue, or my work uniform, but never green. We compromised: I'm wearing my Guinness jersey...from the London pub where her Limey mum works.

I was going to say orange is for Irish Protestants, but Cindy beat me to it! Have a great weekend!

We do actually have a marginally Irish band -- scraped up from the church choir, and we've called ourselves Clan Jamieson. Cheers. We only play fish frys at St. Pius though. But we do Danny Boy and the Whistling Gypsy Rover in 3 part harmony -- two of the most politically incorrect Irish songs ever.

Ann-I must have seen your band there last year at one of the fries. I keep meaning to go to more, but I'm often travelling on the weekends.